Prussian Nights (Russian: Прусские ночи) is a long poem by Aleksandr Solzhenitsyn, a captain in the Soviet Red Army during the Second World War. Prussian Nights describes the Red Army’s march across East Prussia, and focuses on the traumatic acts of rape and murder that Solzhenitsyn witnessed as a participant in that march. 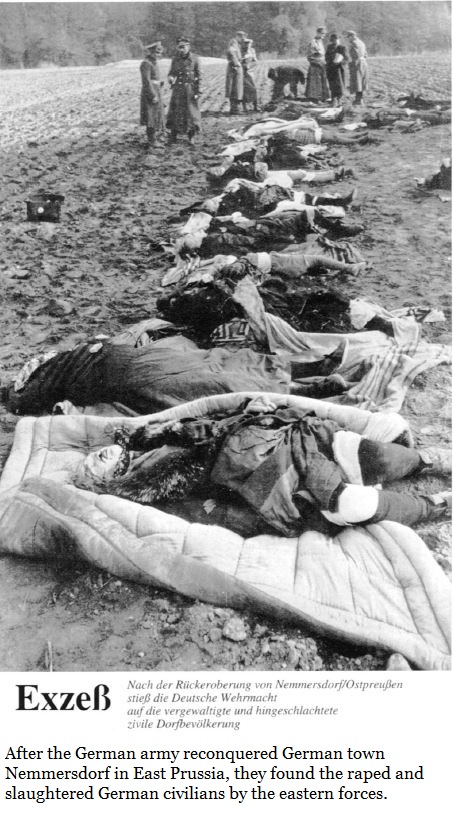 Originally it was Chapter 8 of his huge autobiographic poem Dorozhen’ka (The Road) that he wrote in 1947 as a sharashka (scientific research camp) inmate. The original poem did not survive, but in 1950–1951, working in a hard labour camp near Ekibastuz, Solzhenitsyn restored Chapter 8 and Chapter 9 (The Feast of the victors) as separate poems.[1] The poem is in trochaic tetrameter, “in imitation of, and argument with the most famous Russian war poem, Aleksandr Tvardovsky’s Vasili Tyorkin.”[2]

The poem is based on Solzhenitsyn’s own experiences – he was a captain of an artillery battery which formed a part of the Second Belorussian Front, which invaded East Prussia from south-east in January 1945.[3] The Soviet offensive followed the path of the disastrous offensive by the Russian Second Army under Alexander Samsonov during World War I; the comparison with the Soviet victorious offensive is one of the underlying themes of the poem.[3]

Solzhenitsyn was arrested soon afterwards, in early February, three weeks after the offensive had started.[3] His arrest was partly due to his critique of the treatment of civilians.[4] In the poem he recalls the pillages, rapes and murders committed by the Soviet troops taking their revenge on German civilians, the events which later resulted in the first part of the German exodus from Eastern Europe,[4] e.g.:

The little daughter’s on the mattress,

Dead. How many have been on it

A platoon, a company perhaps?

A girl’s been turned into a woman,

A woman turned into a corpse.

It’s all come down to simple phrases:

Blood for blood! A tooth for a tooth!

Solzhenitsyn composed the poem—about twelve thousand lines and over fifty pages long—while he was serving a sentence of hard labor in SOVIET GULAGS camps.[3][5] Gulag_Archipelago_5

He is rumored to have written a few lines of the poem each day on a bar of soap and memorized them while using it.[6] He also wrote about how composing this poem helped him to survive his imprisonment: “I needed a clear head, because for two years I had been writing a poem—a most rewarding poem that helped me not to notice what was being done to my body. Sometimes, while standing in a column of dejected prisoners, amidst the shouts of guards with machine guns, I felt such a rush of rhymes and images that I seemed to be wafted overhead . . . At such moments I was both free and happy . . . Some prisoners tried to escape by smashing a car through the barbed wire. For me there was no barbed wire. The head count of prisoners remained unchanged, but I was actually away on a distant flight.”[5]

He wrote down the poem between the 1950s and 1970s. He made a recording of it in 1969;[5] it was not published in Russian until 1974 when it was published in Paris, France.[4] A German translation was done by Nikolaus Ehlert in 1976,[4] and it was officially first translated into English by Robert Conquest in 1977.