How can  you “deny” something that does not exist? Not possible!

No Such Thing as Free Speech with “Holocaust Denial” 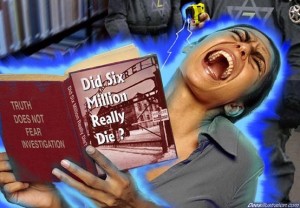 • German lawyer Sylvia Stolz condemned to prison for telling the truth.• Found guilty by “mind-reading” Bavarian judge.By Ronald L. Ray —Sylvia Stolz is an outspoken, 51-year-old lawyer in Germany. At the end of February 2015, she was condemned by Judge Martin Rieder of the Munich State Court to 20 months in prison for alleged denial of the so-called Jewish holocaust during World War II, and for “inciting racial hatred.” But there is just one problem with Stolz’s “guilt”: she never denied anything.Judge Rieder, however, in true clairvoyant fashion, claimed to find the criminal act in what he said was the “meaning and purpose” of a talk Stolz gave in 2012 at a public conference in Switzerland, albeit the “denial” was “not at all so openly addressed.” Instead of judging words and actions, he presumed to judge an unspoken intent—the ultimate in thought-crime prosecution.This supposedly horrific act occurred at an event sponsored by the Anti-Censorship Coalition [Anti-Zensur Koalition] and was one speech among many. Some 2,000 people were in attendance to hear Stolz talk about judicial censorship and gave her a standing ovation. It’s all on video for the world to see—with English subtitles, no less. (Click here for the full video in German.)

Frau Stolz, the wife of imprisoned Revisionist Horst Mahler, is no stranger to persecution. In 2007, Stolz defended Revisionist historian Ernst Zuendel in German court from similar charges of “holocaust denial.” But when she attempted to bring forth exculpatory evidence, namely, scientific and historiographic research which at least raised legitimate questions about the existence or extent of a Jewish genocide in WWII, the judge disallowed her efforts and banned her from the trial. To her credit and honor, the intrepid lawyer continued her vociferous defense of Zuendel as they carried her out of the courtroom.

Because “holocaust denial” is a criminal offense in Germany, no evidence is admitted in favor of a defendant which flies in the face of the “obvious facts” of purported genocide—even when that evidence is the truth. Lawyers who dare inject the truth into the proceedings, as Stolz did for Zuendel, are punished swiftly and severely. That is how Stolz landed in prison the first time, for more than four years, and was disbarred for five years.

So what happened in 2012 to get Stolz into hot water again with the Trotskyites at the Ministry of Truth? What did the woman say?

Frau Stolz spoke about censorship: the deliberate and systematic repression exercised by the German legal system against those who raise publicly any doubt or denial of the Zionist-created myth of “at least six million” Jews “gassed to death” by National Socialist Germany. She reported what happens to people, including defense lawyers, who bring forth the results of numerous scientific studies proving the impossibility of the “gas chamber” story; who point to numerous court verdicts over the last decades, from the Nuremberg war crimes trials onward, which declare the total lack of standard forensic evidence for a Jewish genocide; and who note that those same verdicts declare an almost total reliance on the contradictory testimony of unreliable witnesses, some of whom committed perjury.

That is to say, Stolz simply recounted to the audience what courts themselves and scholars had said about the so-called “holocaust,” which raises doubts about the official story, but about which it is forbidden by German law to speak, in contravention of the country’s constitutional guarantee of freedom of speech and opinion.

Stolz herself took no position on the alleged WWII events at the conference, but she pled for the right of free speech and, following in the footsteps of Western philosophers from Aristotle on, for the importance of seeking the good, the true and the beautiful.

However, a Swiss law professor was offended all the same and claimed she was “inciting race hatred.” “Holocaust denial” is not criminalized in Switzerland, though, and the “incitement” charge is difficult to prove in Swiss courts. It may be for this reason that the Swiss justice authorities asked a Bavarian court to try Stolz—despite the fact that Germany has no jurisdiction in independent Switzerland.

The powers that be demand at all cost that those who dare to speak the truth about WWII Germany be silenced and severely punished. The religious orthodoxy of “Holocaustianity” may not be questioned by the masses, for, if they did, the brutal global hegemony of Zionist warlords and banksters might then collapse.

Now, it seems, the “holocaust” story has become so much a political dogma, that even to talk about the doubts which courts themselves cast on the official narrative is too much truth for the authorities, who swiftly drag the offender to punishment without even a fair trial and presentation of evidence. In Stolz’s case, the Zionist-controlled world media and the Munich court itself deliberately misrepresented the facts to justify a condemnation.

This gross injustice against Sylvia Stolz must be rectified. It is unknown at present whether she will appeal the shameful verdict or not. While the German Constitutional Court, its highest court, has ruled that such freedom of expression is legal and constitutionally protected, the lower courts and prosecutors routinely ignore that judgment and make appeals too costly in terms of additional costs and punishment for the persecuted to take their case to the high court.

Readers are encouraged to contact the German authorities and politely but firmly demand freedom for Sylvia Stolz, using the website of the German embassy in the United States or by calling (202) 298-4000.

Ronald L. Ray is a freelance author and an assistant editor of THE BARNES REVIEW. He is a descendant of several patriots of the American War for Independence.

ON THE JEWISH-RUN SO CALLED “GERMAN” JUSTICE SYSTEM OF THE U.S. CORPORATION CALLED “BUNDESREPUBLIK” 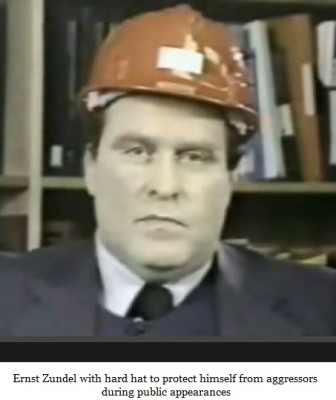 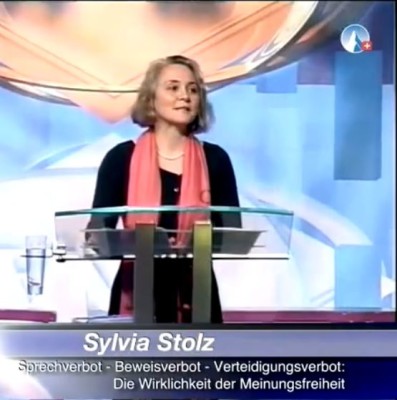 Court Report on the Case of Guenter Deckert

(English translation by Christine B. Miller)

Contrary to the German constitution of free speech, in Germany (and many other countries in the West) the consequences of questioning the holocaust or denying it are prison and fines. As defense lawyer for Ernst Zuendel, who questioned the gassing of Millions of Jews, she was not allowed to bring evidence that there was no gassing. There has never been proof for the Jewish holocaust, only hearsay of a few people and tortured confessions of Germans. Never any evidence has been established in court based on research and documentation. However, scientific evidence has been established that the Jews were not gassed. Ms. Stolz was hindered from making her full defense presentation and arrested and carried out of the court room when she attempted to continue to defend her client, Ernst Zundel.

Below is a Reply by Attorney Sylvia Stolz to NEW Accusations of Holocaust Denial for making a presentation to the public on how the courts had unjustly proceeded against her and Ernst Zundel, and how they defined holocaust denial in their case, and how there is no clear definition by the courts of what the holocaust was [*This lack of clear definition in the courts is done so that it gives the Jews great flexibility then, now and in the future, as it becomes more and more obvious that the Holocaust is a scam to ruin the Germans and make lots of money at it. Pretty soon they’ll say, the Jewish Holocaust is people being incarcerated in well kept work camps. But that is not a Holocaust. A Holocaust is the purposeful murder of an ethnic group. Death through conditions of war, such as lack of transportation, lack of heating material and food, lack of medicine, and other conditions are not murder and the Jews asked for punishment when they ALL declared war on Germany in 1933 (treason) and Hitler put the Jews eventually into very well-kept work camps.~gv]