Posted on June 6, 2013 by eyes wide open
French war crimes against Germans have been tremendous and very cruel. Every country hides their atrocities politically. All the “German” leaders have gone along with that because they are treasonous working for the enemy. Not only that the so called “German” leaders spread and promote lies about the Germans in the Reich because these leaders are serving not the Germans but the Allies, and foremost the Jews. 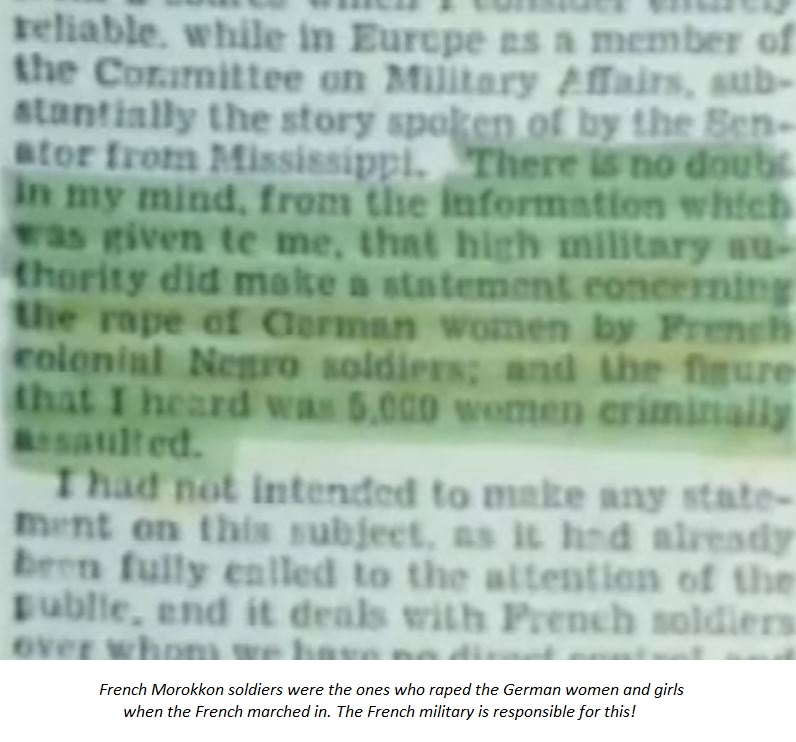 It’s not fair to speculate on what a book doesn’t contain, especially when it reveals the origins of two shameful aspects of American behavior that makes decent people everywhere shake their heads in embarrassment over how low an effort once thought to be noble can go.

In undertaking to review Mary Louise Roberts’ What Soldiers Do: Sex and the American GI in World War II France (2013, University of Chicago Press), I had hoped against hope that it would contain some reference to the cruelty of recent U.S. attacks on numerous countries around the world and the deceitful explanations for undertaking them.

Of course, coming from a mainstream perspective, the author made no attempt to make these connections. But she does provide a timely glimpse into the genesis of these disturbing trends that have turned the USA into a country no longer recognizable as the bastion of freedom and liberty everybody in the world once thought it was. Then again, perhaps it never was.

First off, this is not a book that ranks with Archibald Maule Ramsay’s The Nameless War or James Bacque’s Other Losses, which reveal the still-suppressed treachery that triggered World War II in the first place. But what it does do is show how the U.S. ransacked a nation it was supposed to be rescuing, then blamed the mayhem on soldiers it put in a position to do harm, and then sacrificed a few black soldiers to the outrage of public opinion to cover up the sexual molestation of a whole country.

Roberts, a University of Wisconsin professor who took a grant-funded sabbatical to research this project, explores the carnal apocalypse of a nation already ravaged by the Germans, then subsequently savaged by the American boys who came to rescue them.

“Thus GIs were emboldened to believe the nation was theirs for the taking — at an affordable price . . .”, she writes; “. . . their disregard for French social norms meant they had public sex with prostitutes and assaulted women on the streets. Women’s bodies became became an important means by which Franco-American relations were reordered.”

The lies American officials told about what happened in France in 1944-45 reinforced the horrors of both racism and sexism that were to dominate the following decades and eventually lead to the conscienceless carnage and questionable justifications that were to putrefy America’s subsequent overseas military adventures right up until the present day.

Right after D-Day, the conditions for tragedy were perfect. The Allied bombing had killed more French than the Germans did. Most of the young men of France were in German prisons or in hiding. The country had fallen to the Nazis in an embarrassingly short time and suffered occupation for four years.

Finally, in rode the American conquerers, handsome, well-armed, and rich. One look at the beautiful French girls, with their European openness and unrestrained gratitude at being rescued, and the GIs thought they were in Muslim heaven. But the honeymoon didn’t last long.

France was starving. American soldiers possessed an endless supply of food, and especially chocolate and cigarettes, which the deprived natives craved. Almost overnight, sex turned into currency. French women realized that providing sex was practically the only way to survive. Love turned to business. France’s reputation as an immoral nation was reinforced. The Yanks regarded this ancient but defeated world power as a giant brothel.

“The overwhelming excitement of superhuman heroes rescuing France and destroying it at the same time” quickly turned into “an amalgam of love, excitement and the stench of death” as scared GIs were caught “confusing the primitive openness of the peasantry with immorality.”

Roberts outlines the stages of this tragic relationship as beginning in romantic gratitude devolving into pragmatic pandering, and finally winding up as unrestrained sexual assault. What Soldiers Do is really a microcosm of what the U.S. military (or any conquering army) wreaks on countries it conquers or rescues.

“French men were in prison or in hiding and French women were ecstatic over the arrival of their handsome liberators.”

One Frenchman opined, “With the Germans, the men had to camouflage themselves, but when the Americans arrived, we had to hide the women.” Roberts notes that this was an American problem; Canadians and British did not behave in this way.

France had become a child unable to care for itself. The French crisis of masculinity, demonstrated by its impotence in the face of the enemy, caused irreparable wartime gender damage. It was exacerbated by the public shaming of women who had collaborated with the Germans, shaving their heads and forcing them to march down streets amid the jeers of their neighbors.

Chocolate and cigarettes and chewing gum and Coca Cola became the currency du jour as French women eagerly traded their bodies for them. Turning the sacred sex act into a primary commodity became the shame of a conquered people.

These commonplace treats that cemented friendship between the Yanks and the natives were to become tools of corruption because, for French women, they bought survival.

SEX FOR A PACK OF CHEWING GUM

The French came to be regarded as an immoral, subservient people. In the summer of ’44, all the women of France became prostitutes for the benefits the practice brought, and to stay alive. Americanization had turned the hungry females into hookers, something that readily shows today throughout the world in the cynically liberated manner of styles and behaviors.

Roberts writes that France became “a culture that turned its back on itself in the rush for the gaudy American future.”

GI sex began as a gift, free for the asking, but it became a commodity linked to corruption and bad faith. The American soldiers who faced death every day came to regard it as ‘get it while you can because we might not be here tomorrow’, and their superiors regarded the phenomenon with sarcastic indifference.

THE GENERALS LOOKED THE OTHER WAY

American military authorities tried their best to ignore both the disastrous effects on French society and the skyrocketing incidence of venereal disease among their troops. The Army believed sex was good for fighting men, but had little regard for the women who were providing this illicit relief to their soldiers.

What was most important to them was “VD was a threat to the war effort.”

About the best the Army could do was declare “the sex act cannot be made unpopular.”

‘Going all the way’ had become permissible in the 1920s, Roberts writes. By the 1940s, the experience in France turned it into an ugly epidemic.

It occurred to me as I was reading this part that I wish someone would analyze the reasons countries — and particularly America — go to war with as much precision and depth as Roberts used to to investigate the debasement of French womanhood and the tacit approval of the trend by both U.S. and French authorities.

By the time the U.S. soldiers went home, the big question had become “what to do with all the sick women in France”? The blame was placed on a familiar target.

One hundred and thirty nine of the 152 American soldiers tried for rape during and after the war were African-Americans. Twenty-five of the 29 GIs actually hung for their alleged offenses were black. Roberts called this “the racialization of rape” in the U.S. Army. Operating on traditional racial stereotypes, the author writes, “they sacrificed blacks to appease the French [. . .] Accusations of violence against black GIs gave French civilians the illusion of control.”

Robert concludes this tactic demonstrated “how vital sex was to the maintenance of white supremacy.”

“By making rape at every level a “Negro” problem rather than an “American” problem, the U.S. military engaged in racial scapegoating to deflect the impact of GI violence.”

U.S. officials tried to contain the damage by scapegoating black GIs and proclaiming rape to be a black crime. The French, shellshocked by all that had happened to them, readily agreed with this policy, as both nations tried to save face by covering up the truth of a nasty story of systemic lust and exploitation that was condoned and abetted by the people in charge.

The delight and innocence of the liberation of France that quickly turned to sexual anarchy and lasting resentment became the suppressed paradigm of covered-up military gang rape that continues to plague the world today in every country that is overrun by one army more powerful than another.

To say that war has always been this way is only to continue the legacy of the French kiss turned rancid, and judging by the more recent stories from Vietnam, Iraq and Afghanistan, has turned into grievances far worse than what the prostituted women of France ever experienced.

Nearly 70 years have passed since American GIs liberated much of Europe, and today the world is a different place, much less moral than these comparatively innocent trysts in the ruined byways of France. Seven decades and countless wars later, with authorities looking the other way and saying ‘boys will be boys’ and ‘sex makes better soldiers’, a thoughtless trail of needless tears falls across much of the world, and turned the insides of those who fight into a rotting numbness.

Today, drug-fueled mercenaries plundering helpless countries for contrived reasons dismember the bodies of their underage rape victims in the dusty rubble of Iraq, or indiscriminately bomb wedding parties in Afghanistan, continuing the ignored carnage that began on a day in June with grateful girls innocently welcoming handsome and heroic American soldiers in the once-flowering fields of France.

John Kaminski is a writer who lives on the Gulf Coast of Florida, constantly trying to figure out why we are destroying ourselves, and pinpointing a corrupt belief system as the engine of our demise. Solely dependent on contributions from readers, please support his work by mail: 6871 Willow Creek Circle #103, North Port FL 34287 USA.