Posted on September 18, 2013 by eyes wide open
germanvictims.com - …It is not true that I or anyone else in Germany wanted the war in 1939. It was desired and instigated exclusively by those international statesmen who were either of Jewish origin or who worked for Jewish interests. I have made too many offers for the control and limitation of armaments, which posterity will not be able to disregard forever — for the responsibility for the outbreak of this war to be laid on me. I have furthermore never wished that after the first disastrous world war a second should arise against England…

1) I have left the analysis of Mr. Mark Weber out and just posted the testament. His analysis can be obtained from his website.

2) Comment from Metapedia.org : Even though this political testament is primarily authentic, one needs to look at it with caution. As with many documents that were presented at the Nuernberg Process, there are strong indications of falsification: The outer looks of the document seem unnatural - typing is unaligned and not parallel to the document as normally the very orderly German documents are presented, especially a document of  such great importance. The typing seems to differentiate from page to page quite a bit which is not a result of aging but of using various typewriters. The other outstanding feature is that in the whole document, except for once, the German „ß“ was not used, [*This is unheard of because “ss” is NEVER replacing the „ß“ in German writing] instead a double “s” was used - which led to many spelling errors. Only on the last page, where the signatures are, is the word „daß“ written correctly.

Therefore, it is most likely that the document [*at the Nuernberg Trial] is a falsification. Since the document seems authentic for the most part, it is assumed that the forger had the authentic document in his hands from which he incorporated parts correctly. Great caution is required with text like this:

[*as translated in paragraph 5 of this page below]

This kind of statement could have been added to give the impression that Hitler had knowledge of a supposed “Holocaust.” I do not agree with this. He merely speaks of punishment. “Schuld Buessen” means “punishment for the guilt” and not more than the guilt.

Hitler’s Testament: A Historic Final Statement to the World 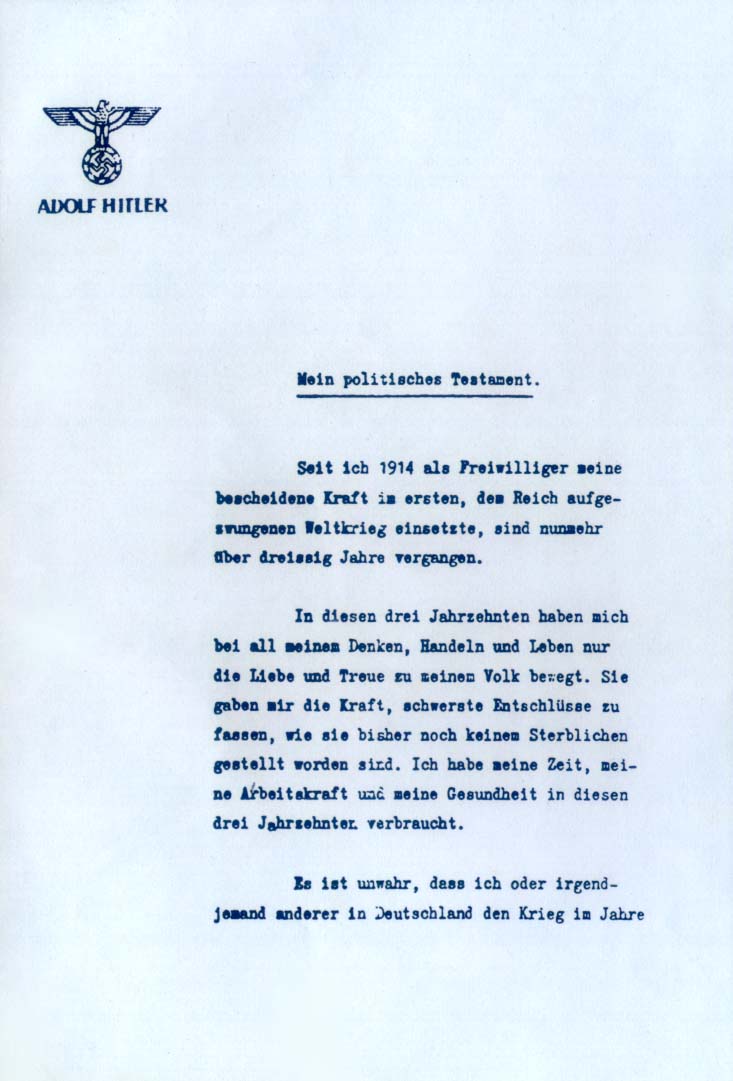 1) More than thirty years have now passed since 1914 when I made my modest contribution as a volunteer in the first world war, which was forced upon the Reich. In these three decades, my life and all my thoughts and deeds have been motivated solely by my love for and loyalty to my people. They gave me the strength to make the most difficult decisions that have ever confronted mortal man. In these three decades I have exhausted my time, my working strength, and my health.

2) It is not true that I or anyone else in Germany wanted the war in 1939. It was desired and instigated exclusively by those international statesmen who were either of Jewish origin or who worked for Jewish interests. I have made too many offers for the control and limitation of armaments, which posterity will not be able to disregard forever — for the responsibility for the outbreak of this war to be laid on me. I have furthermore never wished that after the first disastrous world war a second should arise against England, much less against America. Centuries will pass away, but out of the ruins of our cities and monuments the hatred will continually grow anew against the people that is ultimately responsible, and for whom we have to thank for all this: international Jewry and its helpers!

3) Three days before the outbreak of the German-Polish war I again proposed to the British ambassador in Berlin a solution to the German-Polish problem – one similar to the solution that had been applied in the case of the Saar territory involving international supervision. That proposal likewise cannot be denied. It was rejected only because the leading circles in English politics wanted the war, partly on account of the hoped-for business opportunities, and partly prompted by the propaganda organized by international Jewry.

4) I have also left no doubt that, if the nations of Europe were once again to be treated as mere objects of commerce, to be bought and sold by these international conspirators in money and finance, then also the people who are really guilty of this murderous conflict will also be held accountable: Jewry!

After six years of war, which in spite of all setbacks will ultimately will go down in history as the most glorious and valiant expression of a nation’s will to life, I cannot forsake the city that is the capital of this Reich. Given that the forces are not sufficient to hold out any longer against the enemy offensive here, and that our own resistance is gradually being weakened by men who are as deluded as they are lacking in initiative, I wish, by remaining in this city, to share my fate with those millions of others who have also accepted to do so. Moreover I do not wish to fall into the hands of an enemy who requires a new spectacle organized by the Jews for the amusement of their incited masses.

I have therefore decided to remain in Berlin and here of my own free will to choose death at the moment when I believe the headquarters of the Führer and Chancellor itself can no longer be held. I die with a joyful heart, mindful of the immeasurable deeds and achievements of our soldiers at the front, our women at home, the achievements of our farmers and workers, and the efforts, unique in history, of our youth that bears my name.

That I express my thanks to you all from the bottom of my heart is just as self-evident as my wish that you should therefore on no account give up the struggle, but rather continue it against the enemies of the Fatherland, no matter where, true to the principles of the great Clausewitz. From the sacrifice of our soldiers and from my own solidarity with them unto death, will in any case arise from German history the seed of a radiant renaissance of the National Socialist movement and thereby of the realization of a true national community.

Many of the most courageous men and women have decided at the end to unite their lives with mine. I have begged and finally ordered them not to do that, but instead to take part in the further struggle of the nation. I beg the leaders of the armies, the navy and the air force to strengthen by all possible means the spirit of resistance of our soldiers in the National Socialist spirit, with special reference to the fact that I myself, as founder and creator of this movement, have also preferred death to cowardly abdication or even capitulation.

May it, at some future time, become a matter of honor for the German officer — as is already the case in our navy — that the surrender of a district or of a town is impossible, and that these leaders especially here must go forward as shining examples, faithfully fulfilling their duty unto death.

Before my death I expel from the Party the former Reich Marshal Hermann Göring, and deprive him of all rights which he might have enjoyed by virtue of the decree of June 29, 1941, and by virtue of my Reichstag declaration on September 1, 1939. In his place I appoint Grand Admiral Dönitz as Reich President and Supreme Commander of the Armed Forces.

Göring and Himmler, quite apart from their disloyalty to me personally, have done immeasurable harm to the country and the whole nation by secret negotiations with the enemy, which they have conducted without my knowledge and against my wishes, and by illegally attempting to seize state power for themselves.

In order to give to the German nation a government made up of honorable men, who are duty-bound to carry on the war by all means, I appoint as leaders of the nation the following members of the new cabinet: [ list omitted ] …

Although some of these men, such as Martin Bormann, Dr. Goebbels, and so forth, together with their wives, have joined me of their own free will and did not wish to leave the Reich capital under any circumstances, but have been willing to perish with me here, I must nevertheless ask them to obey my request, and in this case put the interests of the nation above their own feelings.

By their work and loyalty as colleagues they will be just as close to me after death, as I hope that my spirit will linger among them and always go with them. May they be hard but never unjust; above all, let them never allow fear to influence their actions, and set the honor of the nation above everything in the world. Finally, may they be mindful that our task, that of building a National Socialist State, represents the work of the coming centuries, and imposes on everyone an obligation always to serve the common interest and to subordinate his own advantage to this end. I call on all Germans, all National Socialists, men, women, and all soldiers of the Armed Forces, to be loyal and obedient unto death to the new government and its President.

Above all I enjoin the leaders of the nation and their followers to scrupulous observance of the laws of race, and to merciless resistance to the universal poisoner of all peoples, international Jewry.

Source of this translation of Hitler’s “Political Testament” is by Mark Weber. The German text, as well as various English-language translations (not always entirely accurate), have been published in many books and posted on many websites.

An authoritative text of the German original is published, for example, in the official 42-volume record of the Nuremberg Tribunal (IMT “blue series”), Trial of the Major War Criminals before the International Military Tribunal, Volume 41, pages 547-554. (Document Streicher-9)

This entry was posted in History-Geschichte, Hitler-Adolf and tagged Speeches. Bookmark the permalink.