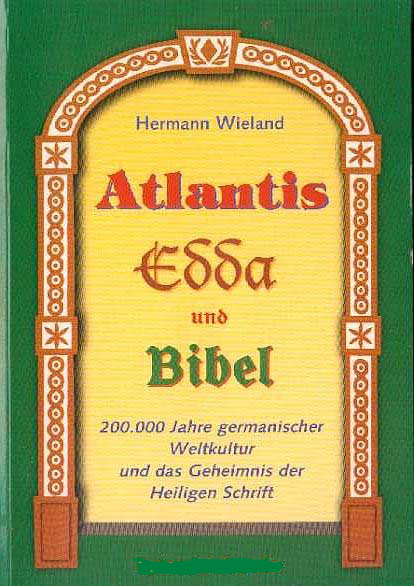 Life Questions of the German People

Need and misery as a result of WW1, made the Germans more critical and mistrusting toward promises. Their deceivers and destroyers’ slogans like ‘brotherhood of all peoples’, and so forth, are not enticing any more. The Germans realize that criminals dragged them down into devastation.

New revelations by s. v. Widdumhoff: ‘Die entdeckten schwarzen Henker des deutschen Volkes’ (the black-robed hangmen of the German people), and H. Lienhardt: ‘Ein Riesenverbrechen am deutschen Volk’ (a gigantic crime against the German people), have opened the Germans’ eyes that religion abuses and takes advantage of the most noble and most trusting in humans to lead them into poverty, shame, desperation and eternal slavery. For these reasons a critical look needed to be taken at religion. Through various research it has been discovered that the Germans, who have been stamped Barbarians and pigs, are the first and only high culture people on the earth. Through historical deception a vail of lies has been drawn over German history so that Germans will not be aware of their great history and cultural experience and would so allow exploiters and swindlers have power over them.

Some of the many questions the Germans had:

*Can the teaching of the church that the earth is only 6,000 years old be correct when science claims its age to be millions, if not billions, of years?

*Can man only be on the earth for 5,684 years when his presence has been established for millions of years?

*The bible presents a pair in paradise, Adam and Eve. Were they red, black, brown or white? The Hebrew word for Adam means read-brown and so refers to a bastard of the lowest race. In Assyrian ‘Adam’ means Udumve. That’s what they called the race that was part human, part animal. The holy Hieronymus translated Adam with cattle (beast). What about Eve?

*How can descend from one couple so many various races who are different in built, looks and character? Can they all be considered equal?

*The bible not only speaks of humans, but also speaks of the children of God (Theos) who took for their wives human children. What are children of God and what are humans? Are the first a higher human race, the sons of God called the ‘Goten’ or of Theos (Tius Zius), the white and only humans in contrast to the human-humans, i.e., the human-like animals, mentioned in the Edda?

*Why did God say: “Let us (plural) make humans in our image? Where there many gods?

*Who are the ancestors of the Germans? Are they from the children of God, the Aurinar-Race or from the human-like race, the animal-humans or Neanderthal humans?

*Who are the ancestors of our enemies? Animal-Humans or Bastards?

*When we Germans come from the “children of God” as in the Bible, and our enemies from animal-humans, something that racial scientists have proven without a doubt, (see Dr. Woltmann: Politische Anthropologie. Gobineau, Wilser, Gunther usw.), is it then not insane to speak of equality? Isn’t a lamb not always eaten when it associates with wolves?

*Was it not total foolishness and a shame to make contracts with bastards and animal-humans, as in the diktat of Versailles, Spaa and London, and to make oneself to slaves of animal people? Is the diktat of Versailles not a godless work after the bible clearly says Canaan and Sem, the lower races, are to be the slaves of Japhets, meaning the white race, and Jesus expressly demanded the destruction of the animal-races?

*Was there really a flood that came over the whole earth and destroyed everything? Impossible. Or was it an old report of a catastrophe on the earth? Who was Noah? How could all these different races come from him?

The bible tells us of a “holy, selected peoples.” Could these really be the Hebrews, these gruesome and blood-thirsty people, who the Bible witnesses to have slaughtered massively children, practiced cannibalism, and preyed on all peoples of the earth? Would God have chosen these people as the Volk that would bring forth our savior, Jesus Christ? Is this not brutal history forgery by the Jews?

Who are really the holy, selected people of God? Is it the children of God, the German race? The bible speaks of a holy city of God in the middle of an ocean, (see chapter 11, 30, and 31), “at the many waters,” “between two oceans,” “by the many islands in the ocean,” “with the valuable mountain of God between two oceans” “with the borders in the middle of the ocean” (see chapter 30), “with the throne of God in the middle of the ocean” (s. chapter 30). Can this mean Jerusalem? Never! Which city was it? Are we presented with fraudulous old reports? Definitely. Then much in the bible, especially the most important things, has been forged! Was the island of Atlantis the paradise mentioned in the bible?

Why is it that the Spanish conquerors of Central America discovered there cultural customs of the Catholic church: Baptism, Last supper, holy water, popedom, priestly robes, cross, confession, forgiveness of sin even though America was not connected with Europe for thousands of years? Why is it that the same cultural habits were found in Tibet (Asia) in Buddhism without the Christians ever having had a connection with them?

If it is a historical fact that these practices existed long before the Catholic Church, how did Tibetans, Near-East peoples, Mexicans, and Egyptians obtain this pre-historic Catholic Christendom? Is their Christendom older than that of the Roman church? Or is the Roman church the continuation of the American-Indian-Jewish-Tibetan custom?

When representations of a crucified male were on hand and honored long before Christ in the Aztec and Egyptian cults, what does this mean regarding Jesus? Did he really live 1900 years ago? Or when? When Norse tales long speak of a crucified high personage long before Christendom, then who is Jesus, and what is the historical truth regarding his person? Did he really live in Palestine or where and when? Why did the Jews falsify history and for what purpose?

If the Christendom taught cannot be held upright historically and the Roman church is only a continuation of an Aztec-Buddhist-Hebrew heathendom, then was it not a humongous crime committed against the German people with a false Christendom by Karl dem Großen (Carl the Great) until now? Is it then not insanity to split the church into confessions and fight each other?

Why are the gospels Buddha’s and Christ’s so similar, sometimes word for word, even though Buddhism is about 500 years older? Why is the life story of Buddha so similar to that of Jesus?

How would it have turned out in German history, culture and politics, and what change regarding WW1 would have happened, if the German people had not followed the false Christendom of an Aztec-Buddhist-Hebrew heathendom?

What would German history been like if the false, deceptive teachings had not taken foothold and the Germans had developed their own culture further? What reputation will the Germans receive when the historical lies will be uncovered and no longer false and deceptive teachings determine our doing and living, paralyzing our strength?

So we ask ourselves: What is it then with the bible? Is it really God’s word? Or does it come from ancient history reports, changed by the Jews for the benefit of the Jews? Who are the original scribes of it? Who are the Jews?

These are serious questions the Germans need to raise and their answers are of the utmost importance. The aforementioned are just a few questions selected from the many the Germans must ask themselves as they have a tremendous effect on their future lives.

A huge amount of effort was expanded in the past to answer these questions. We are thinking of the publications of von Döllinger, von Bugge, Delitzsch, Niemojewsky, Drews, Chamberlain, Stuhl and others. But a satisfying answer was not found, partially because the publishers only answered half-questions, because they stayed firm on the ground of Biblical reports but left out age-old lore and history from other countries.

Astronomy, Geology, Paleontology, Anthropology, Ethnology and newer historical research to connect the reports of the Bible with the German Edda and the ancient sagas of the peoples of the earth. We will frequently refer to Atlantis, a glorious part of German culture. We hope to bring light into the darkness of history forgery to make way for the resurrection of the German people.

Excerpts and translation by germanvictims.com

This entry was posted in German culture-Deutsche Kultur, History-Geschichte, Religon. Bookmark the permalink.